This year we started the season in April with a display in the 2016 Tradex Car show for 3 days, joining Lucas Oil Territory Representatives Derrick Johnstone and Larry Groat.

The summer brought both highs and lows for both cars.

At the NHRA Lucas Oil race both cars attended with the Super Comp car going 4 rounds. The Northwest Outlaws Series brought a win for the Top Dragster in early summer. At the NHRA national Open in Mission a broken chassis did not deter the team, as the motor and transmission were removed and chassis was repaired by fellow racer Randy Parker. One round of qualifying was missed an effort that did not go unnoticed by fans or the announcers. 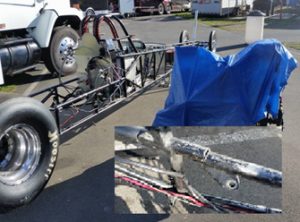 View all posts by: Evansadmin